I was finally able to finish off the ork warbikes with base flocking and final matte spraying, only seventeen years later. I’m pretty sure I purchased all of these two house moves ago and they’ve just been bouncing along in storage all this time. The good thing, sort of good, is that my rule (more of a temptational guideline) of not purchasing new models until I finish old models means I can finally purchase some new toys. 🙂 If I want to, I have to confer with my son as to future projects that would be mutually enjoyable. I still have tons of old projects that I’d like to complete or, in the case of the Tyranids, sell off. I believe I’ll knock out some of my old Eldar (space elves) projects next. Here’s the full mob;

Half a dozen were all the same hunched-over bald guy.

Here are the Nobz two-seater bikes with a Gretchin and a Mekaniak as passengers. 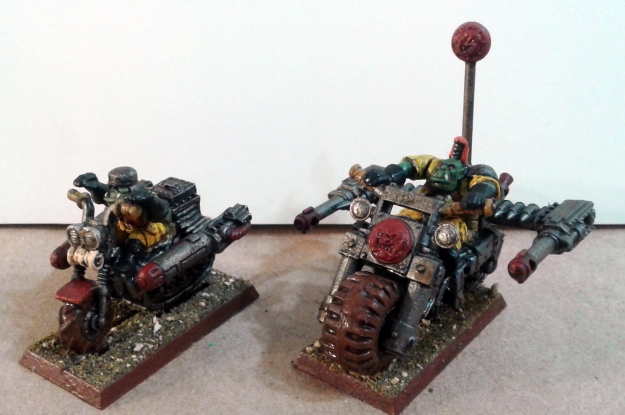 I figure the Ork Meks reworked the Tau particle cannons to shoot big, heavy, slow-moving slugs. After all, if you can’t see streams of chunky bullets flying out of your guns what good are they? Ork philosophy there. I did have four bikes finished from back in the day, here is three of them; 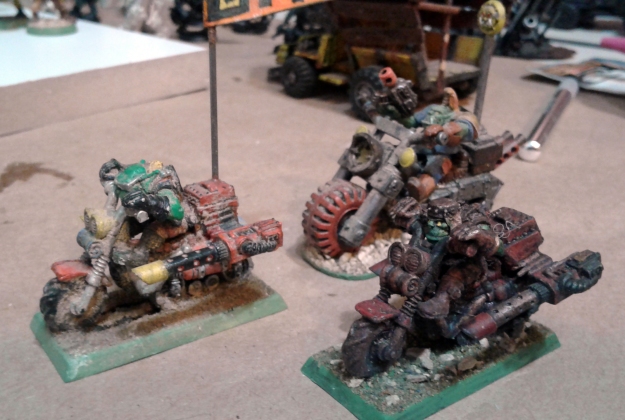 They’re a bit dusty. Under the old rules you couldn’t bring many bikes, but they also used to have twin-linked auto-cannons and generated smokescreens from their exhaust that provided cover saves for any troops behind them. A bit silly and over-powered back then, much more balanced now, and the current lists allow biker swarms. After finishing the mods and making sure they all have the same 25mm x 50mm base they all get black primer so the paint jobs will all have the same base. There are eleven bikes, plus riders, to paint, but they are all using the same color scheme/palette and that should help get this done quicker.

A few other projects were finished this week, here is the completed Deffkopta; 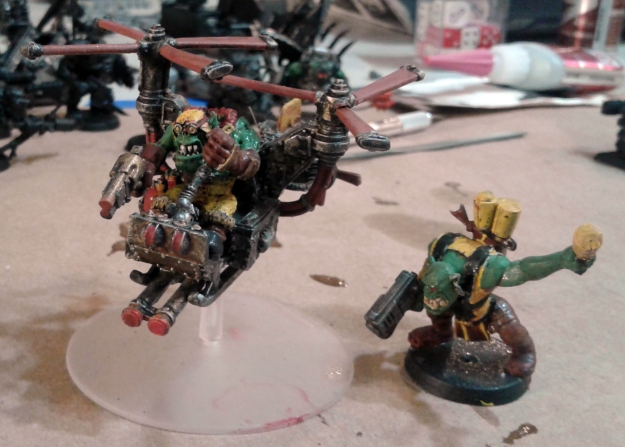 Recipes, musings and ideas- plus ' how to' tutorials

The Military History of Religion

With some fiction, RPGs, and random cats to keep my sanity...

w00t.. a blog about tabletop games
Looking for Geeks

No one wants to stand alone among the zombies.

A plethora of projects...

Wargaming made simple and fun!

The journal of a free wargames rules designer

The greatest WordPress.com site in all the land!

by The Ministry of Gentlemanly Warfare