When I was kid I lived on an island.

I didn’t know how cool this was at the time, nor how how it would shape my life in regards to resource management, self-sufficiency, creative problem solving and a true love and healthy respect for the natural world. There were no trees, we were #3 ring on the crank-powered party-line phone, food and supply barge would come every six months, sometimes a plane would drop off a film and everybody would gather at our house to watch it as we had the biggest living room. Later on, when vcr’s  were invented, a tape would arrive every day from Anchorage with four hours of whatever; news, entertainment, incomprehensible commercials-from a week ago. It was a little glimpse into the future, four hours at a time, of what was happening in the rest of the world. Eventually were voted off of the island and rejoined civilization, but I’ve always carried the islands lessons with me.

One of those lessons was, “Do it Yourself”. In those little glimpses of the World I would see things like a “GI Joe Action Playset!”, and ordering one was really out of the question, so I made my own out of cardboard and string with ramps, platforms, bay doors for tank access, working elevators, etc. It was great fun and I had done it myself. Years later when I rejoined the world I saw a movie called Star Wars, you may have heard of it, and I, like everyone else, was enraptured by the final Death Star trench run sequence. When I got home I wanted to recreate that same excitement and drew up a boardgame that worked a lot like Chutes & Ladders but with X-Wings trying to get down a trench with a Darth Vader Tie Fighter steadily closing in from behind. I brought it to school and my classmates played it until the tape fell off and the paper wore through. Sometimes nobody won, but that was okay. Some kids wanted to borrow it to play at home, but it was my only copy, and why couldn’t they just make their own? Probably because they grew up in a city, so I painstakingly built another copy to loan out, which never returned.

I’d made lots of toys and other little boardgames like that over the years, but it was never easy to share my ideas and toys with others, until this thing called The Internet came along. No longer was I #3 ring, now I could tap into a global community of many other like-minded peoples. I still think it’s pretty cool. 🙂 The best part, for me, is the evolution of Print-n-Play games and toys available online. Now when I have a fun idea for a toy or a boardgame I can put it online and people all over the world are able to print it out at home and play with my creations, and I can do the same the same with theirs. Even better, if I lose a part, or don’t have enough of a certain type, I can just hit print again and make all I need. The internet has given me an almost infinite toybox. 😀

And now, because I’m me, a plug for a friend who is also a Print-n-Play advocate; https://www.kickstarter.com/projects/872350932/temporum-oblitus-time-forgotten 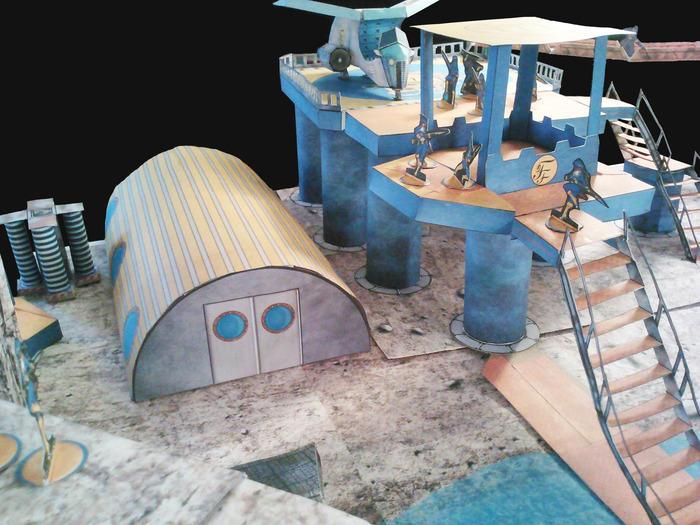 This fine fellow, Aaron Hopkins, has been working diligently on crafting an entire galaxy-spanning saga of conflict and destruction involving aliens, robots, dictatorships, and freedom fighters and is making it available in it’s entirety as a PnP download so that everyone can make their own version of his world. Yes, there is a lot to build and craft and assemble, but that’s part of the fun. And once that’s done it’s play, play, play. 😀

Best of luck Aaron and Happy New Years to the rest of you. 🙂

Good heavens; one post for the entire year? Apparently I’ve had no thoughts of any consequence nor completed any projects of merit this entire year. Actually I’ve been quite busy and I keep forgetting this blog is here.

“The WordPress.com stats helper monkeys prepared a 2014 annual report for this blog.”

A San Francisco cable car holds 60 people. This blog was viewed about 1,400 times in 2014. If it were a cable car, it would take about 23 trips to carry that many people.

Recipes, musings and ideas- plus ' how to' tutorials

The Military History of Religion

With some fiction, RPGs, and random cats to keep my sanity...

w00t.. a blog about tabletop games
Looking for Geeks

No one wants to stand alone among the zombies.

A plethora of projects...

Wargaming made simple and fun!

The journal of a free wargames rules designer

The greatest WordPress.com site in all the land!

by The Ministry of Gentlemanly Warfare